An interesting case from the United Kingdom reported by the Daily Mail about a husband who argued that his divorce settlement should be reduced because shortly after his net worth was decimated by the crash. I wonder whether we will see any such claims this side of the pond. 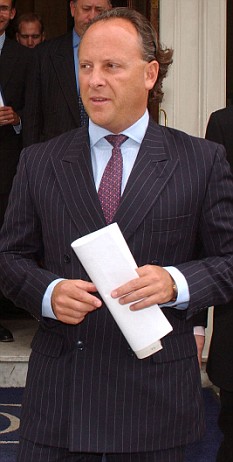 Brian Myerson has lost millions in the credit crunch

"A City tycoon who claimed his £11.2million divorce payout should be renegotiated because he had been hit by the credit crunch was today told that he could not 're-write' the deal.

Brian Myerson, 50, had told the Court of Appeal that the global economic crisis had taken a heavy toll on his assets following his divorce from his wife Ingrid.

The Johannesburg-born investor and his sculptor wife divorced in March last year, and he was ordered to pay her 43 per cent of the total £25.8million assets of the marriage, including their luxury South African beach house.

But polo-playing Mr Myerson decided to take the bulk of his £14.6million cut in share in investment company Principle Capital Holdings.

As the credit crunch tightened its grip, the businessman saw the value of his shares plummet.

In a case that was watched eagerly by wealthy business folk facing similar woes, he told the court last month that if he complied with the order, he would be half a million pounds out of pocket.

Today, three appeal judges dismissed his challenge, saying the 'natural process of price fluctuation, however dramatic' did not satisfy the legal test for a change in a settlement.

They said that although the appeal had its 'dramatic features', its resolution was 'not difficult'.

Lord Justice Thorpe, in the written judgement, said: 'The husband, with all knowledge both public and private, agreed to an asset division which left him captain of the ship, certain to keep for himself whatever profits or gains his enterprise and experience would achieve in the years ahead.'

In a rhetorical conclusion he added: 'When a businessman takes a speculative position in compromising his wife's claims, why should the court subsequently relieve him of the consequences of his speculation by re-writing the bargain at his behest.'

In a cautionary note for anyone considering following the executive chairman's actions he said many could be contemplating an attempt to reopen settlements after encountering 'financial eclipse', but he added: 'They would be well advised to heed the warning that very few successful applications have been reported.'

He did however offer some hope for My Myerson, pointing out that he still enjoyed control of his company and the 'opportunities that go with it'.

'The market place may take a pessimistic view of his future prospects. He may not share the market place view. Unusual opportunities are created for the most astute in a bear market,' said the judge.

Neither of the Myersons were in court to hear the judgement.

But a spokesman for the tycoon said: 'Mr Myerson is disappointed that the court failed to recognise that the economic downturn had rendered his divorce settlement unfair.

'The aim of Mr Myerson's appeal has always been to ensure that the division of assets with his ex-wife was equitable and he will now take his appeal to the House of Lords.'

Before the divorce, the couple, who married in December 1982 and who have two sons and a daughter, lived in a £5million home in Hampstead, north London.

Mr Myerson, who bought an £8million home in Geneva after the divorce, agreed to pay his former wife £9.5million in instalments over four years. She also received a property in South Africa, which was worth £1.5million.

Mr Myerson, the court heard, had property assets, one of which he sold to cover the first instalment of the lump sum, £7million paid in April 2008.

He has four further equal instalments of £625,000 to pay over the next four years.

But Mr Myerson's share stake, once standing at £15million and rising as the price reached £3 per share, had dramatically fallen with the value per share at the date of the initial Court of Appeal hearing standing at 27.5 pence.

His spokesman said yesterday that the high court would be hearing a freestanding application to cancel the further payment due to his ex-wife under the terms of the existing settlement.

'That hearing will be in private,' he said."

Posted at 08:13 AM in International | Permalink