This from the London Times reporting about a case in Florida. April 17, 2009. 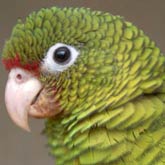 “Oh my God, that’s him!” So Angela Colicheski exclaimed as the young subject of her custody battle with Sarita Lytell was brought into court. Both women knew that only one of them would be leaving the court in Florida with the youngster each had, at different times, nurtured and doted on. The judge looked on gravely as he realised that in deciding which desperate woman should win custody, he would have to exercise the wisdom of Solomon.

The custody clash was similar to many other previous cases except for the fact that it was about a 13-year old African Grey parrot.

For ten years, Colicheski had loved and cared for the parrot she called Tequila. Then, three years ago, he flew away over her garden fence. Colicheski ran frantically all over the district but could not find him. She was distraught and heart-broken. Three long years passed. Then one day Colicheski was sitting in a local Dunkin Donuts chatting to Lytell, whom she had just met, when they started to talk about parrots. Lytell said she had one called Lucky that she had found three years earlier. It quickly became clear that he was the one Colicheski had lost. Lytell refused to hand him over, having formed a bonded relationship with the bird.

The judge heard a lawyer for Lytell argue that as she had cared for the bird for three years it had become hers. Colicheski’s lawyer, however, argued that the parrot was a chattel (a piece of legal property) and must be returned. The judge agreed, saying that the parrot was treated, under state law, as personal property. “If the plaintiff had lost her automobile somehow along the way,” he asked rhetorically, “would it be any less her property when she found it?” He ruled that Tequila was the property of Colicheski as she was his original owner and carer for ten years.

Tequila did not give sworn testimony but he did give squawk testimony. As soon as he was brought into court and saw his previous owner he emitted what witnesses said was a loud call of recognition.

This is not the first such dispute. In 2006 in Argentina, in litigation between Jorge Machado and Rio Vega, the court ruled that a parrot called Pepo, which each man claimed was his, should be imprisoned until it uttered the name of its owner. Five days later it squawked “Jorge” and sang the anthem of his favourite football team, San Lorenzo. The evidence of another parrot caused problems in Leeds in 2006. Chris Taylor discovered his partner Suzy was having an affair when his parrot, kept saying, in a perfect mimic of her voice, “I love you Gary”.