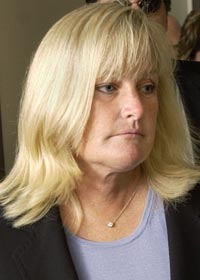 Despite earlier claims, it now appears as though Debbie Rowe has said she is looking for custody of their two children. The former nurse broke the silence she has maintained since the singer's death during a late phone call to a local NBC reporter, who quoted her as saying: "They are my flesh and blood. I'm going after my children."
Debbie gave birth to Michael Jackson's two elder children, Prince Michael, 12 and 11-year-old Paris Katherine, during their two-year marriage. She has also reportedly said she would consider raising his youngest, seven-year-old Prince Michael II, born to a surrogate mother.

After the news broke of her desire to seek custody, Debbie's lawyer said she was still considering her options, and had "not reached a final decision".

Lawyer Eric George did not challenge the accuracy of the NBC report, however. " I came to learn this morning that she shared some of her thoughts late last night with a local reporter," he said.

"I have no reason to doubt that what was reported from that conversation was accurately and ethically reported But that said, it would be a distortion of the truth to allow that single snapshot from a single conversation to stand in the truth of Debbie's position on these sensitive matters."

A custody hearing which was scheduled for Monday has been postponed until July 13 at the request of Debbie's team.

Fifty-year-old Debbie relinquished parental rights after her divorce in 1999, but sought them again in 2003. An appeals court hearing then ruled there was an error in the petition she had filed to give Michael full custody, but the former couple settled out of court in 2006.

In his will, filed this week, there is nothing to suggest that Debbie would be guardian to his children, with Michael naming his mother Katherine Jackson and Diana Ross as a backup.

Michael's 2002 will includes a clause which states that the pop star "intentionally omitted to provide for" former wife Debbie Rowe Photo: © Getty Images

Hello.
When someone is so huge as was Michael, they (the Parents) made a decision to do as was with the children. Now in his demise, I hope Debbie the mother will take the children and enjoy the both maternal and paternal influences as she knows them and raise them, fill in lost dad puzzle pieces and have a blast with THEIR children. after all, they are children and she is the mom. Please, Mr. and Mrs. media, leave them be. thank you, nancy--simple country girl in stockton missouri. They (the children needed Michaels protection while he was alive from the media, but she can handle it--I PROMISE!!! God love you debbie and I am here for you, visit anytime, (on the sly) your friend, nancy

Today is too precious, should not worry for acid bitter and astringent regrets that way. The chin up, make thoughts, like ChunYang next leap springs. Seize today, it never comes back.