One of Germany's richest women, Katrin Radmacher, has claimed victory in her bid to get a pre-nuptial agreement recognised in the English courts. 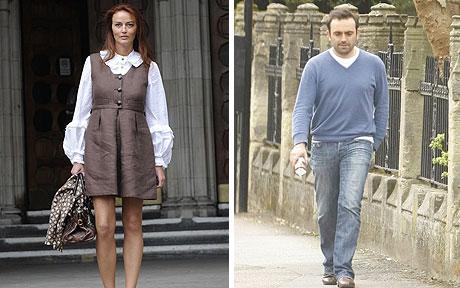 Katrin Radmacher and Nicolas Granatino. Radmacher is said to be worth £100 million.

Miss Radmacher, said to be worth £100 million, won a ruling from the Court of Appeal that the pre-nuptial contract should be taken into account by the courts when they divide assets after a marriage fails.

Her former husband, Nicolas Granatino, had agreed not to make any claims on her fortune if they split up, but was awarded £5.85 million for his own use by a High Court judge last year.

This has been cut to about £1 million as a lump sum in lieu of maintenance with a fund of £2.5 million for a house which will be returned to Miss Radmacher when the youngest of their two daughters, who is six, reaches the age of 22.

His debts of about £700,000 are to be paid off by the heiress, who had always agreed to this settlement.

The couple's marriage was said to have broken down after Mr Granatino, 37, gave up a lucrative job in the emerging markets sector in 2003 to become a £30,000-a-year biotechnology researcher at OxfordUniversity. They divorced in 2006.

Mr Granatino is expected to seek permission to take the case to the House of Lords for the issue of pre-nuptials to be reviewed by the highest court in the land.

Representing Miss Radmacher, Richard Todd QC told a panel of three Court of Appeal judges headed by Lord Justice Thorpe at a hearing in April that the freedom to agree a contract was "at the heart of all modern commercial and legal systems".

He said Miss Radmacher had never said that her former husband would leave the marriage with nothing.

Miss Radmacher, 39, said in a statement: "Firstly, I will never regard my marriage as a mistake. I have no regrets as our marriage has given me two wonderful daughters.

"I am delighted that the court accepts that the agreement Nicolas and I entered into as intelligent adults before our marriage should be honoured.

"Ultimately, this case has been about what I regard as a broken promise.

"When we met and married, Nicolas and I were broadly on an equal footing financially. He too is an heir to a multimillion-pound fortune and, when we met, was an investment banker earning up to £330,000 a year.

"The agreement was at my father's insistence as he wanted to protect my inheritance - this is perfectly normal in our countries of origin, France and Germany. My father taught me the value of hard work and family values.

"As an heir himself, Nicolas perfectly understood this. The agreement gave me reassurance that Nicolas was marrying me because he loved me as I loved him... that we were marrying for the right reasons.

"The arrangements the court has ordered will enable our daughters to live comfortably when they are with their father, and that is the way it should be. Nicolas and I made each other a promise and all I have been asking is that he be kept to it."

Her solicitor, Ayesha Vardag, commented: "For 160 years prenuptial contracts were said to be void for public policy reasons. They were put in the same category as contracts to kill your hated spouse.

"Now, in a landmark judgment, three of the most highly-respected judges in the land have ruled that pre-nups can be decisive in determining the financial division on divorce.

"As my leading counsel, Richard Todd told the court, the genius of the Matrimonial Causes Act is that it allows the law to change with the times.

"Lord Justice Thorpe praised two modern principles: first, that there should be due respect for adult autonomy. Responsible adults should be allowed to decide the financial fate of their marriage themselves without excessive interference from a nanny state; second, that the old public policy argument reflects the laws and morals of earlier generations. We have moved on.

"The Court of Appeal, in a carefully-reasoned, thoroughly modern judgment has enabled English matrimonial law to catch up with the rest of the world.

"From today grown-ups can agree in the best of times what will happen in the worst of times."

The solicitor said Miss Radmacher had succeeded in securing a ruling that the pre-nuptial contract should be decisive.

The heiress had accepted that, in any event, the father of her children should have a home for as long as the children were young enough to need to stay with him.

Miss Radmacher, a paper industry heiress, had challenged the Family Division ruling by Mrs Justice Baron that it would be "manifestly unfair" to hold Mr Granatino to the pre-nuptial contract, which was signed in Germany before the couple married in London in 1998.

Although the judge recognised that the pre-nuptial agreement would have been fully enforceable in Germany or France, she ruled that they have never been legally binding in this country.

She also said that the arrival of the couple's children had "so changed the landscape" that it should be set aside.