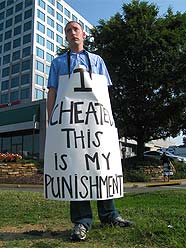 Burning shame combined with the August morning sun and about a gazillion highly amused stares was the punishment one man endured for cheating on his wife.

William Taylor of Centreville, Va., got caught getting a little action on the side when he forgot to remove the incriminating evidence from his cell phone.

After finding the proof, his wife doled out a rather interesting punishment -- she forced him to stand at one of the busiest intersections in the D.C. metropolitan area wearing a sandwich board telling everyone he's a cheater. Consider it a modern-day version of a scarlet letter -- humiliating, but less catastrophic than some scorned women's destructive revenge tactics.

"I thought she was kidding, but she was serious," Taylor said.
"I figured I got to do what I got to do to makes things right. So here I am."

His punishment is set to last all week. Each day when morning rush hour winds down, William gets a text from his wife, giving him permission to stop the public humiliation for the day, although repeat sightings of Taylor suggest this is at least a week-long punishment. Those daily texts will probably make him happier than all the ones he got from his mistress combined.

At least this a creative approach in attempting to find the road to forgiveness, although I'm not altogether sold on shame solving anyone's troubles.