How Not to Talk to Your Kids

The inverse power of praise. 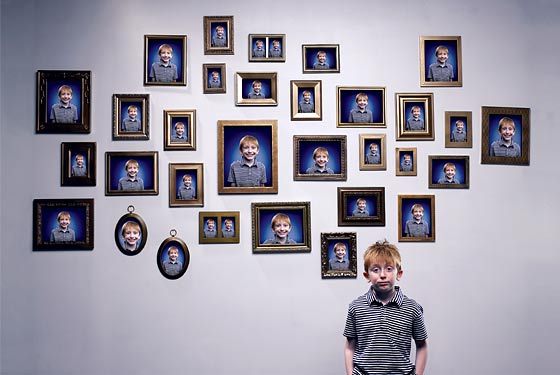 What do we make of a boy like Thomas?

Thomas (his middle name) is a fifth-grader at the highly competitive P.S. 334, the Anderson School on West 84th. Slim as they get, Thomas recently had his long sandy-blond hair cut short to look like the new James Bond (he took a photo of Daniel Craig to the barber). Unlike Bond, he prefers a uniform of cargo pants and a T-shirt emblazoned with a photo of one of his heroes: Frank Zappa. Thomas hangs out with five friends from the Anderson School. They are “the smart kids.” Thomas’s one of them, and he likes belonging.

But as Thomas has progressed through school, this self-awareness that he’s smart hasn’t always translated into fearless confidence when attacking his schoolwork. In fact, Thomas’s father noticed just the opposite. “Thomas didn’t want to try things he wouldn’t be successful at,” his father says. “Some things came very quickly to him, but when they didn’t, he gave up almost immediately, concluding, ‘I’m not good at this.’ ” With no more than a glance, Thomas was dividing the world into two—things he was naturally good at and things he wasn’t.

For instance, in the early grades, Thomas wasn’t very good at spelling, so he simply demurred from spelling out loud. When Thomas took his first look at fractions, he balked. The biggest hurdle came in third grade. He was supposed to learn cursive penmanship, but he wouldn’t even try for weeks. By then, his teacher was demanding homework be completed in cursive. Rather than play catch-up on his penmanship, Thomas refused outright. Thomas’s father tried to reason with him. “Look, just because you’re smart doesn’t mean you don’t have to put out some effort.” (Eventually, he mastered cursive, but not without a lot of cajoling from his father.)

Why does this child, who is measurably at the very top of the charts, lack confidence about his ability to tackle routine school challenges?

Thomas is not alone. For a few decades, it’s been noted that a large percentage of all gifted students (those who score in the top 10 percent on aptitude tests) severely underestimate their own abilities. Those afflicted with this lack of perceived competence adopt lower standards for success and expect less of themselves. They underrate the importance of effort, and they overrate how much help they need from a parent.

When parents praise their children’s intelligence, they believe they are providing the solution to this problem. According to a survey conducted by Columbia University, 85 percent of American parents think it’s important to tell their kids that they’re smart. In and around the New York area, according to my own (admittedly nonscientific) poll, the number is more like 100 percent. Everyone does it, habitually. The constant praise is meant to be an angel on the shoulder, ensuring that children do not sell their talents short.

But a growing body of research—and a new study from the trenches of the New York public-school system—strongly suggests it might be the other way around. Giving kids the label of “smart” does not prevent them from underperforming. It might actually be causing it.

For the past ten years, psychologist Carol Dweck and her team at Columbia (she’s now at Stanford) studied the effect of praise on students in a dozen New York schools. Her seminal work—a series of experiments on 400 fifth-graders—paints the picture most clearly.

Dweck sent four female research assistants into New York fifth-grade classrooms. The researchers would take a single child out of the classroom for a nonverbal IQ test consisting of a series of puzzles—puzzles easy enough that all the children would do fairly well. Once the child finished the test, the researchers told each student his score, then gave him a single line of praise. Randomly divided into groups, some were praised for their intelligence. They were told, “You must be smart at this.” Other students were praised for their effort: “You must have worked really hard.”

Why just a single line of praise? “We wanted to see how sensitive children were,” Dweck explained. “We had a hunch that one line might be enough to see an effect.”

Then the students were given a choice of test for the second round. One choice was a test that would be more difficult than the first, but the researchers told the kids that they’d learn a lot from attempting the puzzles. The other choice, Dweck’s team explained, was an easy test, just like the first. Of those praised for their effort, 90 percent chose the harder set of puzzles. Of those praised for their intelligence, a majority chose the easy test. The “smart” kids took the cop-out.

Its good to find a source of information that can be useful, especially when looking for something to occupy me, thankyou for your help and being of assistance, there's a good wealth of information here. When you have more i'll be happy to view it.

Divorce is tough on both parties. Men should be aware of all the laws involved or at least know where to look for resources on