By Travelmail Reporter
Last updated at 1:16 PM on 03rd September 200

If you're experiencing marital strife, the thought of sharing your two-week holiday in the Maldiveswith a marriage guidance counsellor may not be conducive to patching things up.

But if one Indian travel firm's idea to use holidays to pull couples back from the brink of divorce catches on, the concept could be heading for Britain.

Mumbai-based KV Tours and Travels is offering 'divorce tourism' packages where couples are accompanied by a relationship counsellor to encourage them to give things another go. 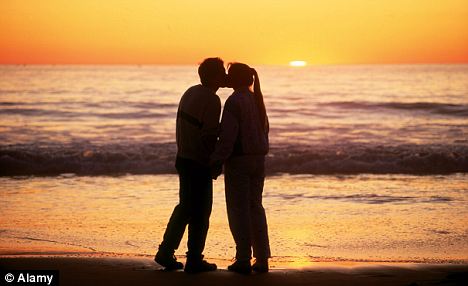 Lovers reunited? A holiday can be a last resort for warring couples

Despite the fact that Indiahas one of the world's lowest divorce rates with one in 100 married couples breaking up, it is apparently on the rise.

KV Tours and Travels chief executive Vijesh Thakker, who was inspired by the break-up of a friend's marriage, said: 'With divorce tourism, what we're trying to do is to bring together couples who are heading towards divorce to stop them.

'Nowadays divorce rates are rising, so we need to sort it out. It's a good thing we're doing. And we're helping domestic and international governments by promoting tourism.

'We're not destiny changers, we want them to treat the trip like a second honeymoon.'

Holiday options range from week-long breaks in hill station resorts at around $720 to far-flung destinations.

'We're trying to send them where they have not been before, where there are not many people - and no relatives,' added 'happily-married' Mr Thakker, who believes a  seven-day holiday is long enough for a couples fate to be sealed.

Mr Thakker is marketing the concept to family members keen to see their relatives reunited.

Clinical psychologist and psychotherapist Rhea Pravin Tembhekar said the idea might work in some cases - but not all.

She said: 'If you're fighting about trivial things, like time management or in-laws issues - "my mother, your mother, my money, your money, etcetera" - maybe a holiday might work.

'But sometimes the issues are very critical, like domestic violence. You can't go on holiday and resolve that.'

Wow! what a Great posting! I am impressed with your work & I liked it. You did a very gorgeous posting. Good luck man with your work. ;)
webroyalty

I recently came across your blog and have been reading about divorce. I thought I would leave my first comment. I dont know what to say except that I have enjoyed reading. Nice blog. I will keep visiting this blog very often.

what a Great posting! I am impressed with your work & I liked it.